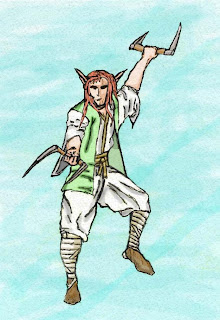 It's been a long time coming, but I finally finished Lithender's tale for the next book. For all intents and purposes 5 stories are completed out of 10. While it feels good to once again be in the waning stages of a book I won't soon shake how difficult this particular story was. As someone who isn't inclined to going on boats often, to have a story that focuses so much on the nautical aspect of the elves in general, was a difficult transition for me to make. More so even than when I worked on Julienna's tale.

One should never take for granted the subtle influence that accurate details can sway over fiction. Or, at the very least, accurate as they are known in the present. I'm specifically thinking of H. P. Lovecraft who made a reference to Piltdown Man at a time when it was considered science fact and was not yet known to be a hoax. Now it's an almost comical addition to one of his best stories (The Rats in The Walls), but at the time it was a factual detail added to infuse the story with some gravitas.

For my part I chose to use less field terminology and more sensuality than I did in the case of the breach birth. Then again... I've never really liked boats so I may have been disinclined to stay long enough to really cement any of the information in my head.

Anyway, my first short story anthology is halfway complete, and I'm still targeting the second half of 2010 (very late in the second half I presume) for its release.
Posted by D W Hawthorne at 11:57 PM