Australia and The Longest Flight Ever 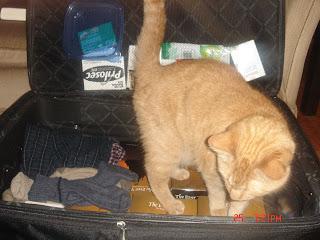 Overall I would say that I'm expecting this trip to be amazing, even my packing was Fable approved. Above you can see him "helping". So far it has not disappointed. Our initial plan was to use a limo service to have a passenger van pick us up and schlep us to the airport. Unfortunately the vehicle was having battery issues so instead of the van they had to send us off in the vehicle below: 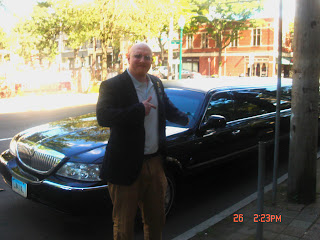 I must say that our driver, Joe, with Hy's Limo, was a lot of fun and he helped us circumvent a massive traffic jam in New Jersey. Sometimes, when I think about traffic in New Jersey I imagine that it's the highway Neil Gaiman and Terry Pratchett are really talking about in Good Omens.

It turns out you need Visas to go visit Australia... not a big deal, but it would have been nice if our itinerary printouts from the airline didn't say exactly the opposite (and it's not the only detail their electronic communications had wrong - I'm looking at you info about how many bags we could check!). If anyone is planning on traveling with United any time soon I'd strongly suggest you do yourself a favor and weigh your bag before you leave your house. If you're over 50lbs you get hit with a $150 charge... but if you top 70 lbs it jumps up over $300.

The flight to San Francisco was an hour and a half quicker than normal because there was virtually no headwind! This allowed us to take some time between flights and eat a meal at a Mexican restaurant at the airport (surprisingly reasonably priced too, and with quite tasty food). We then boarded our second plane for a flight that now dwarfs the duration of every flight I've ever been on. I can best describe it as flying to London from NYC, and when you get there instantly deciding not to land and instead... flying back to NYC. Because of the time difference we boarded the flight at about midnight EST. With the help of a couple of Dramamine I also got in a full 8 hours sleep. The problem with that is that I then had to spend the next 8 hours cramped next to a stranger just waiting to get out of the cramped confines of the cabin with its stale air and raucous engines.

Amazingly, after 26 hours of travel (including the limo ride) we arrived in Sydney and the ladies on my team still managed to look this good getting off the plane: 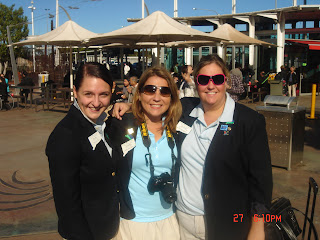 After arriving at my Host's house (for week 1) I found our Itinerary for this week. It stands as the following:

Monday: Jetlag Day. Landing in Australia and getting situated.
Tuesday: Vocational Day/Rotary Presentation.
Wednesday: National Park (Bushawalking is to be expected).
Thursday: Recreational Training Facility (A nature walk including local artifacts and culture).
Friday: Visiting Canberra and seeing the American Embassy.
Saturday: Visiting Camden and possibly going into the Blue Mountains.
Sunday: Swapping over to our next hosts.

When I'm not doing presentations, learning, or running about and exploring the locale I will be staying with my hosts Peter and Debbie for this week in their lovely home: 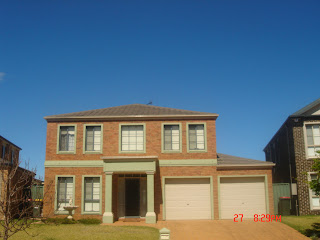 What struck a lot of us was how much this little neighborhood in Camden (Narellan) happened to remind us of houses in California. One thing I can say that does feel different is that since landing I don't think I've seen any clouds. The sky just seems to go on forever. Ok, enough settling in. Time for some exploring!
Posted by D W Hawthorne at 9:41 PM