A "Bushwalk" is more than just a "hike"

Today we went on a Bushwalk. One thing that can be said about Australia is that only the toughest and hardiest of lifeforms can stay alive there. Today the Picton Rotary took us to a nearby national park and together we traversed some of the most inhospitable terrain I've ever had the privileged of stumbling through.

Very nearby to the spot where we parked there was a large gorge that housed The Mermaid Pool. 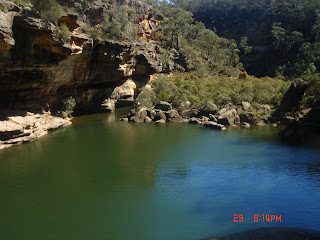 I was told that the reason it is called the Mermaid's Pool is because there is an Aboriginal tale about a mermaid that lived at the pool and would lure men to the water with her singing... and then she would drown them.

The temperature was in about the mid-80's (F), but I still ended up drinking about 2 1/2 liters of water, which did not prevent me from cramping up due to dehydration. The land was very unforgiving, making the pictures seem that much more valuable. We managed to traverse an area that most locals haven't tried to conquer. 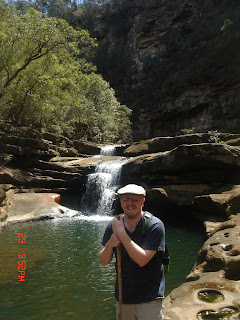 To give you an idea of how difficult the terrain was... this was one of the easier parts of the trail as it was both less steep and more traveled than other sections: 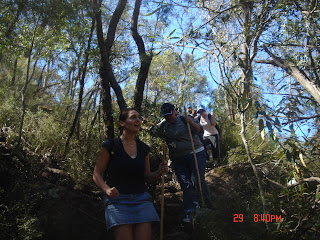 From front to back this was Ellen, Adrianna, Heather, Sandra and Vlad. There were 14 of us all told.

Before heading back to the car site Alan and some of the team members decided to swim in the frigid (some would say numbingly cold) water. I was actually straddling the waterfall that Alan was swimming under in this picture: 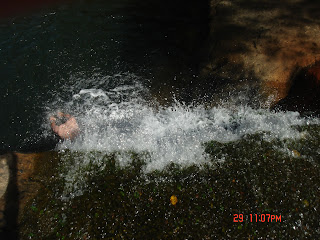 While I have not yet seen a living kangaroo, I have seen an array of birds and this little fellow, which the locals call a "skink": 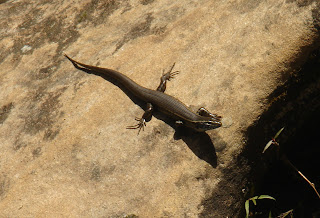 Amazingly after hike we went to King George's Pub, the oldest licensed pub in NSW. Their homebrew is known for being one of the best microbrews in Australia and I can attest for its tastiness. It's similar to a Sam Adams, though sweeter and more potent. I had a couple Scooners (larges) and half a minnow (small) of it and later in the day the team converged to do our GSE presentation, which went incredibly well for our first real overseas work. The audiance even got the baseball references.
Posted by D W Hawthorne at 8:00 AM