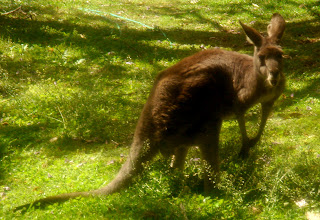 We finally got to see our first live kangaroo on Thursday. She was small for a Kangaroo and she was 18 years old. She was a rescue. We went to see a farm that rescued animals and raised birds and had a variety of fruit trees (down to 300 trees due to a recent fire, but previously over 1,000).

We also got to see a couple collections while visiting the farm. Afterwards we went on a bit of a historical lesson as we saw how people in Woolendilly lived at the end of the 18th century and later including a lesson on the local aboriginal culture.

Friday was another day of running around and jam packed with learning. We travelled all around the capital including parliament, the US Embassy, and the Australian War Memorial. Below is a picture of the Lone Piper playing "Flowers of the Forest" as is customary for Australian Military funerals. People familiar with The Dropkick Murphey's rendition of Green Fields of France will be familiar with this custom. 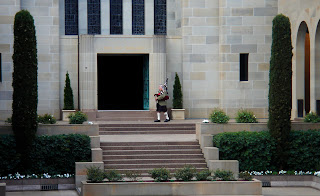 Here is a shot from the front of parliment that can see straight through the capital city: 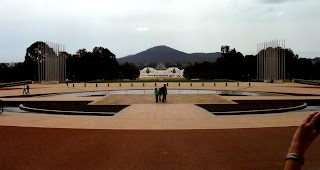 Saturday was a trip to the Blue Mountains. Unfortunately for us there was quite a bit of rain and fog (a good thing for the area, though, which is in need of rain). A couple times the mist and the fog cleared so I could get some good shots. 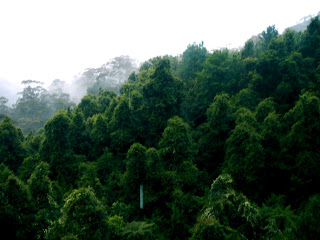 The three sisters, located in the fog to the right in the picture below, were unfortunately not visible during our visit. However, we did get to do some exploring in the nearby rain forest and we got to take the steepest railcar in the world, which drops at 52 degrees. 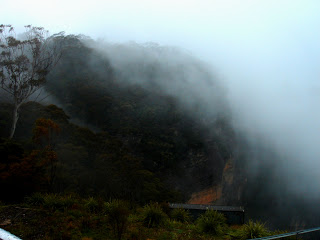 Below is the first video I shot of our stop at the Blue Mountains. It details the fogginess and stands as proof of my indeterrable ability to bring rain with me whenever I travel.