Somewhere down under the rainbow 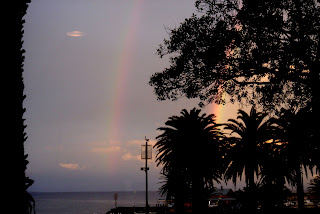 Dual rainbow action! Kiama welcomed us with open arms, and the weather has managed to split the rain and clouds at times for fierce sunshine and open skies. While walking with Pepsi we got to see some of the beach front views of Kiama including the beach below, which the surfer's called "Mystic Beach."

You can only get to the beach by trekking through the woods or swimming. There are no cars. It's not very populated. Since Sandra claimed a beach a few Kilometers away as her own, Alan and I decided to claim this as Alan and Dan's beach. While it's true that I'm not much of a beach person due to the lack of shade and volume of water the seclusion of this spot fits my needs for relaxation... plus with the trees so close I can hide in the shade and just watch the waves. It was walking in this area of Kiama that we got to see humpback whales playing in the water not far off.

We spent most of yesterday at the University of Woolongong. It's a beautiful campus, but also very young with its eyes set firmly on its future rather than its past. It is in the process of developing a medical health center and has a technology center that incorporates visionary technology with entrepaneurial ambition. While the collection of tech buildings make heavy use of green technology we found out some interesting things, like the fact that they are limiting the use of solar panels because in those same buildings they are working on the next generation of solar panels which will be cheaper and more efficient (and easier to produce). This is the view from the main building at the tech center where you can see why there is no short supply of inspiration for big ideas. 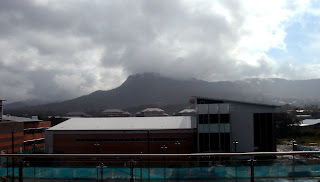