We started off our time in Hurstville doing a bit of “getting to know you” with our new host family. The next day we were run around and got to tour some of Sydney, followed by our largest Rotary meeting yet. There were four clubs all gathered for a single meeting… somewhere over 100 people were present. It also happened to be, in my mind, our best presentation to date. We really fed off the energy of the crowd and they laughed when we hoped they would laugh and stayed in rapt silence when we hoped they’d be retaining information.

The next day we visited Symbia Zoo, which is a cross between a petting zoo and a standard zoo. At this zoo we got to not only feed kangaroos, wallabies, emus and other animals, but we even got to pet a Koala. Most of the time we were there the Koalas slept, as they are apt to do, but when they were awake they seemed docile. However, we were careful around them as we were warned that they can get aggressive, especially if they feel provoked. 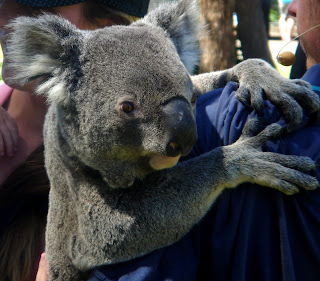 In addition to the Koala we got to see the Tasmanian Devil. They look nothing like the cartoon character. There is currently an illness that is quickly devastating the natural Tasmanian Devil population on Tasmania, it is forcing conservationists to try and create a breeding population in other areas in case the population becomes too thin to guarantee the survival for the species.

It is the same reason the zoo is trying to collect funds to build an add-on to their current set up that would add two Sumatran Tigers, in the hopes of starting a breeding group. According to the information they gave us there are only about 250 Sumatran tigers left worldwide.

After our time with the animals we spent more time driving around Sydney allowing us some spectacular views of the Sydney Opera House and the Sydney Harbor Bridge. These two structures epitomize the skyline of Sydney more than any two other structures. I can never look at the Sydney Opera house without being reminded of my mother. When I was young she often mentioned that it was one of her favorite buildings and that she loved the elegance of it. At the time I think she was secretly hoping I would go into architecture rather than writing. 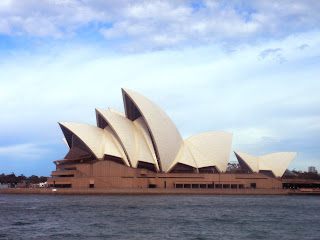 I finally got some sunburn, on my left elbow where I apparently missed with my spray, and on the tops of my feet where the sand and water obviously wore down the sun block to the point where it could no longer do its job. But the burns aren’t bad, thanks to some heavy cloud cover giving me the assist. We also had a dinner tonight that allowed us to meet some new people, including one of the team members for the Australian team that will be coming to Connecticut.

Tomorrow is a vocational day and I’ll be flittering around the publishing industry here and then going to a Cancer Lodge (a medical in-house treatment center specializing in Cancer treatment and research). Hopefully I’ll have some new and interesting information to paste here this weekend. In the rare bouts of free time that I’ve had I’ve also been working on retooling “The Song of Ending” for the upcoming Ever War short story anthology. I expected my visit here to inspire a different story, but the fact that it inspired me to revisit and rework a different story first is a testament to the transitional effect this trip is having on me.