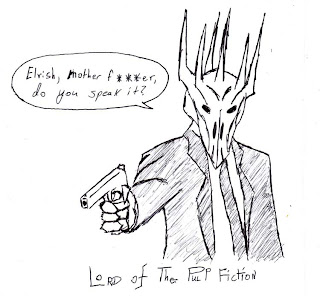 Another short story has drawn to its conclusion and that leaves me with four more to complete before my fourth book can be compiled. I'm still enjoying the freedom of the narrative options that short stories allow compared to writing a straight forward novel. In order to properly celebrate I figured I would throw pen to paper and sketch a little bit of comedy, hence the two little sketches that look as if they were created by the rough and untrained scrawl of a child. No, they were created by me and to my knowledge no children were harmed in their creation.

Peter Jackson and Quentin Tarantino on the other hand may both be offended by this odd mish-mash. Never the less it amuses me and so I'm sharing it with you. In fact the thought that inspired it was finding out that Guillermo Del Toro will no longer be directing The Hobbit. I was imagining who I thought would be best to replace him and as my mind scanned directors it amusingly stumbled over the thought of Tarantino directing it. It is true that he has not yet thrown his hat in the ring to direct an epic sword and sorcery fantasy and I do hope that at some point he conjures something up, but I don't think his pop and patience directing style best suits the work. My hope is Del Toro's friend Alfonso Cuaron can be talked into stepping up and taking the helm.

Ok, back to real life and to figuring out which story I'm going to tackle next. In the mean time I'll leave you with this: 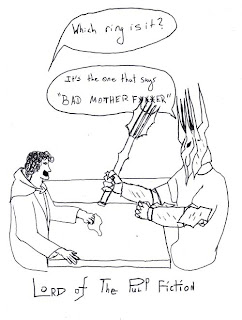